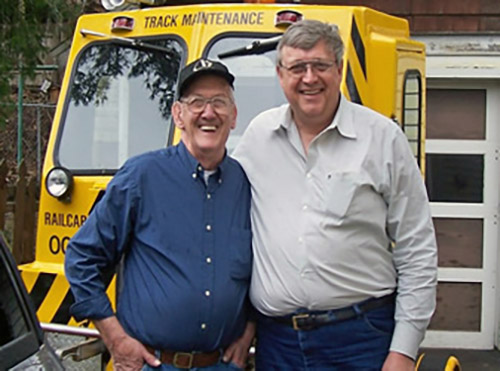 Harvey and Dan departing on their first run April 27, 2007

A Life Long Interest in Railroads

Harvey and his son Dan have enjoyed railroads their entire lives. Dan received his first toy train when was five weeks old. Harvey has built several model railroads using his considerable skills as a tool and die maker. These skills also help with maintaining Railcar 007. In August of 2006, Harvey came upon a run of rail speeders by chance. He told Dan about it and Dan began researching the hobby. They joined NARCOA and in October 2006, they found Railcar 007. In November 2006, they passed their operator's exam and purchased insurance. During their first run in April 2007, they were generously mentored by Warren Riccitelli of the Northeast Railcar Association.

A Father and Son Team

Since then Harvey and Dan have enjoyed several railcar excursions in New York and Pennsylvania. Harvey has taken the role of engineer, bearing all the responsibility of both operating the car safely and supervising his errant flag man, Dan. Dan basically does all the signaling work during a run, including flagging, ringing the bell, and blowing the horn. The horn irritates the engineer, so Dan likes it.

Harvey and Dan have christened their hobby the "D&H Railway" which stands for Dan and Harvey. Harvey is the Chief Engineer, Dan is the President, and his sister Adrianne is the Queen of the Hoboes on the railroad. Dan is thinking of getting a railcar and keeping it at his place in California so they can have a western division of the D&H and make runs when it is cold back east.