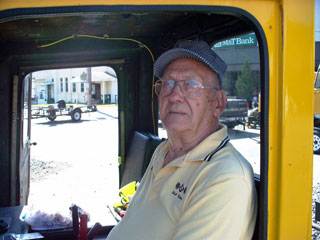 Harvey at seton in Arcade, NY - 'Let's get going!'

The Arcade and Attica Railroad

More than 20 rail car operators enjoyed a beautiful three day excursion July 10-12, 2009 in Western New York.  Organized by Dave and Perrin Verzi of Ohio Valley Railcars, this run spanned three railroads and over 140 miles of track in three days.  Friday July 10 dawned clear and sunny, a beautiful day for rail speeding.  We set on the Arcade and Attica Railroad at the station in Arcade, New York.

The Arcade & Attica Railroad is a short line railroad that originally connected Arcade with Attica, New York.  The principal business of the Arcade and Attica is a passenger excursion train from Arcade to Curriers (usually pulled by a steam locomotive) and the road also handles agricultural products between Arcade and North Java.  South of Arcade, the line interchanges with the Norfolk Southern. The right of way north of North Java was abandoned in 1957 due to flooding. 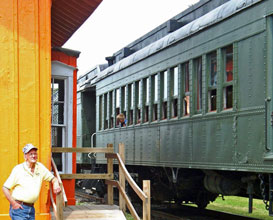 Harvey checks out the train at Curriers

Dave picked a great set on location, with multiple places for set on and good parking.  Dave and Perrin and their assistant Jamie Samuell inspected cars and checked paperwork before we set on.  To make the run a success, Dave executed a complex choreography with the steam excursion train.  After our safety meeting, we set out from Arcade and ran north east passing Curriers and Java Center.  We turned at North Java.  We returned to Java Center for lunch and then went back to Curriers to wait for the passenger train on a siding.  We meet the steam excursion train, pulled by the Arcade & Attica’s number 18, a 2-8-0 built in 1920 by the American Locomotive Company in New Jersey.  Then we headed then back to Arcade station, going beyond the station to allow the passenger train to return and discharge its passengers.  With Perrin throwing switches and operating crossing signals, we continued to the interchange with the Norfolk Southern, where we turned.   After a stop for ice cream, we headed back to Arcade Station to setoff in time for dinner. 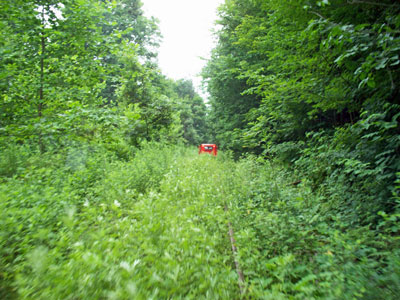 On Saturday July 11, we set on under cloudy skies at the New York and Lake Erie Railroad’s Gowanda station.   After a safety meeting and some words from Don Rogers, our railroad host, the group began a stunning run through Western New York’s Amish country.  The area is mostly rural, with no commercial development, and several refurbished depots can be seen along the way.  Visiting this area is almost like stepping back in time one hundred years ago. 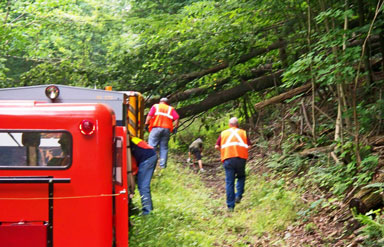 From Gowanda, we headed south up a 3% grade, climbing 1400 feet in less than four miles.  At the summit, the line goes through a 97’ stone tunnel built in 1865.  At the junction on the summit, near Dayton, we switched over to the Cattaraugus branch and continued southeast to Cattaraugus.  This branch is not frequently used and was overgrown.  A recent washout had weakened the rails and stranded some of the NYLE’s freight cars at Cattaraugus, but the rail was suitable for speeders.   We ran to Cattaraugus and turned there.  The rain began as we headed back to Dayton and quickly became thunderstorms.

At Dayton, we switched and headed south west to Cherry Creek, where we stopped for lunch and browsing in their refurbished station which is now a shop that sells Amish made items.   After lunch, the sun came out and we ran further down the line to Conewango Valley, where we turned.

The group stopped in South Dayton for ice cream before returning to Gowanda.  Dave arranged for the cars to remain on the track for next day’s excursion.  Dave also set up an enjoyable visit to the Gowanda and Buffalo Model Railroad Club that evening. 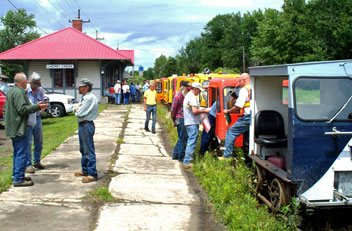 Stopping at Cherry Creek NY on the NY&LE

On day three, we ran The New York and Lake Erie Railroad. We had sunny skies for our trip northbound from Gowanda.  After a safety meeting that included Bert Feasley, our host for the day, we crossed a bridge over spectacular Cattaraugus Creek and entered the rails of the Buffalo Southern Railroad.

The Buffalo Southern is short line railroad that runs 32 miles southward from Buffalo to Gowanda. The railroad passes through prime industrial, residential and agricultural lands and has interchange connections at Buffalo with the Norfolk Southern, CSX, the Canadian Pacific and the Buffalo and Pittsburgh. 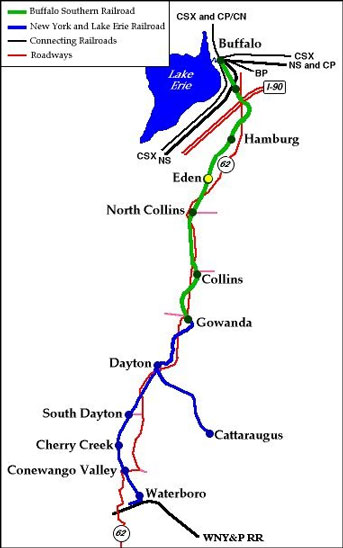 From Gowanda, we ran through Collins, Eden, and Hamburg, with our railroad host flagging busy crossings.  There are several bridges across deep ravines that have creeks flowing to nearby Lake Erie.  After a stop to get clearance, we passed through the diamond into the Blasdell and Buffalo Yards.  There, we saw several Norfolk Southern and CSX freight trains before we turned and came back to Hamburg for lunch and ice cream.  We continued back to Gowanda and stopped short of the station to allow a NYLE train to depart before entering the station for setoff.

This enjoyable and safe run was well planned and operated by Dave Verzi.  His leadership in all things, from coordinating towing of a disabled car during a driving thunderstorm, to reminding us all to follow the rules, to making sure we all had ice cream every afternoon was superb and made this a very enjoyable and exceptional excursion.

[Dan wrote this article for the Setoff September-October 2009 issue]