Once again, Warren Riccitelli provided an interesting weekend run on the picturesque Finger Lakes Railway August 15-16 in west central New York.   Warren makes certain that this run is always different and interesting each year and 2009 was no exception.  Bruce Habberfield, our railroad host, did a great job making us welcome.

The Finger Lakes railway is one of the most ‘speeder friendly’ roads we have been on.   Each morning we had coffee and doughnuts at set on courtesy of the railroad.  This was greatly appreciated since most railcar operators seem to run on coffee and doughnuts!  Bruce also made sure each car had a packet of information about the line, the local area, and a detailed map of the entire line.  Best of all, Bruce arranged for us to have the entire route to ourselves for the weekend.

Most of the over 30 cars were able set on Friday night on a spur just north of Geneva, graciously arranged by the Finger Lakes Railroad with one their customers, Blowers Fertilizer. This set on location is excellent since it provides multiple set on sites and excellent parking. 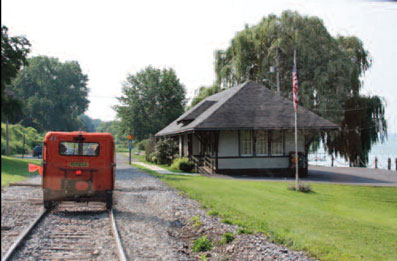 Saturday dawned hot and humid, and it remained that way for the entire weekend, setting records for high temperatures and humidity. After safety meeting, we started out going east from Geneva, through Seneca Falls, then across the beautiful wetlands that head Lake Cayuga. After crossing the bridge over Lake Cayuga, we continued through Auburn after a rest stop. We continued east and turned at Martisco station, which is now a railway museum. We were met at Martisco by museum members who had prepared a great selection of items for lunch for us to purchase to benefit the museum. The club aims to make the museum one of the finest in the US and they are off to a great start.

After lunch we started on our return. We stopped for a tour of the Central New York Model Railroad Club at Skaneateles Junction. The club has a very interesting 21 x 57 foot HO layout that has been operating since the 1970s. After delays due to hirailer derailments, we returned at 6:30 for setoff. This is route is former New York Central track and totaled 72 miles round trip. 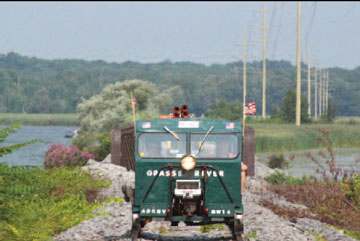 Sunday morning set on was at Victor NY an included a welcome from a railroad preservation group and the town of Victor.   After the safety meeting, we headed out from Victor on former Lehigh Valley and New York Central track south east to Clifton Springs and turned the cars.  Then we rode to Canandaigua, turned our cars and went back to Shortsville for lunch.  At Shortsville, Warren had arranged for a special lunch buffet at a nearby restaurant.  The lunch was “huge and good” according to one participant.  Thanks to Gary Shrey, long time ride along spouse Rita Poesse was mentored and is now a NARCOA certified operator!

We were delayed by an incident that, thankfully, the excursion was not a party to.  Three rail fans had been following the excursion from crossing to crossing on motorcycles, taking pictures.  At one crossing, one of the riders rear ended the other two.  The accident resulted in minor injuries.  Warren took charge, called 911, and organized the first response from within the excursion until the fire and police could arrive.  Our party included an EMT and a physician who responded immediately to care for the injured.  Other speeder operators moved the damaged motorcycles out of the road, provided flagging, and stood by with fire extinguishers.

Fire and police arrived shortly and transported the injured person to the hospital.  The Fire Chief told Warren that he never seen anything like our response.  He had been to drills and seen lots of safety vests and flags, but never to the extent had he seen on this hot summer day.  Bruce commented that in all his years on the railroad as a safety officer and in all the Operation Life Saver drills he has done, he never seen nor participated in a real event like this. He was extremely grateful for the caliber of our group and the way that the NARCOA members reacted to this emergency.

We returned to Victor of set off at 3:30 after riding 33 miles.  Warren did a great job managing a large group and leading us through an ambitious excursion.  More importantly, the group helped NARCOA perform admirably in an emergency, completing this run in a manner that is exemplary and reflects great credit on NARCOA and the Finger Lakes Railway. 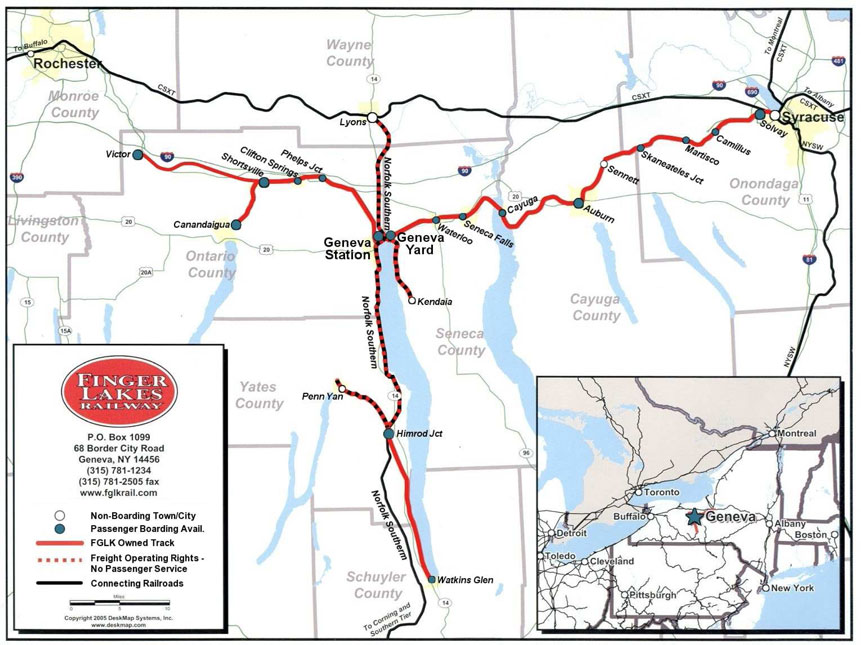 [Dan wrote this article for the Setoff November - December 2009 issue]