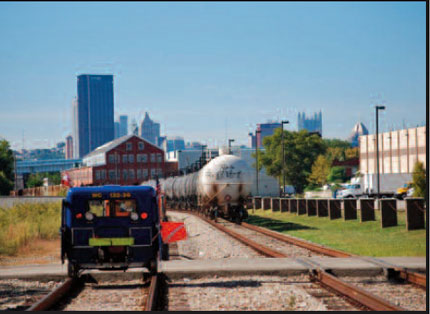 NARCOA members from seven states and Canada enjoyed a beautiful late summer weekend in the Pittsburgh area riding the rails in an excursion organized by EC John Gonder, assisted by Paul Rujak, and Chuck Badger. 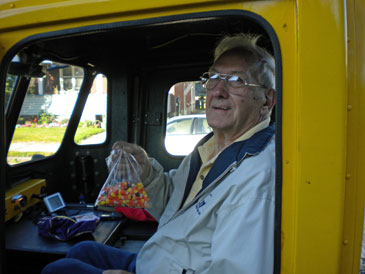 On Saturday, September 19, thirty cars set on the Allegheny Valley Railroad at a spacious, fenced in industrial site in New Kensington, PA.  The Allegheny Valley Railroad acts as a feeder line connecting its many and varied customers and western Pennsylvania to major railroads such as CSX Transportation and the Norfolk Southern Railway, and several regional roads as well. 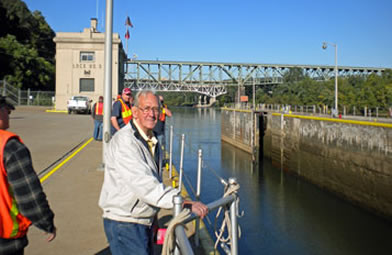 Harvey inspects the locks on the Allegheny River

After our safety meeting and car inspections were complete, we ran out of the set on site and on to the main line in New Kensington.  As the sun came out, we headed west and enjoyed the sights along the Allegheny River as we headed to Downtown Pittsburgh.  The right of way stays close to the river and we saw lots of late summer activity on the river.  John arranged a special treat for the group as we stopped at and toured the C. W. Bill Young Locks and Dam along the river operated by the Army Corps of Engineers.   The locks master gave us an in depth tour of the entire facility. He discussed the challenges of operating year round and the types of traffic the lock handles. 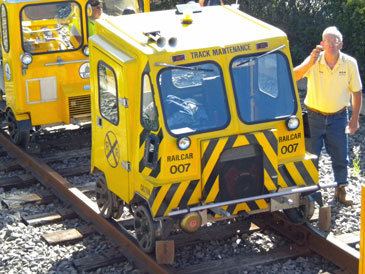 We continued west through Arnold, Oakmount, and Verona and then directly into downtown Pittsburgh.  We stopped for lunch and shopping in the rejuvenated city center area where old and new buildings create a unique experience.  John picked a great area where all the shops and restaurants were within a block or two.  After we had eaten and shopped, we turned and started back east, stopping for an afternoon ice cream break in Oakmount.  We arrived back at our start point and all were setoff by 5 PM after a very interesting and enjoyable 38 mile run.

Lineup at the Safehandling Yard on the Southwestern Pennsylvania Railroad

On Sunday, we rode the Southwest Pennsylvania Railroad, which is composed of the former Pennsylvania Railroad Southwest subdivision, a Baltimore and Ohio secondary, and a Penn Central subdivision.  This line provides local service to many customers in the area, connecting them to the outside world via interchanges with major roads such as the Norfolk Southern, CSX Transportation, and the Wheeling and Lake Erie.

We set on at the Safe Handling intermodal yard at Mt Pleasant PA.  This is perhaps the most spacious and convenient set on site we have ever seen – it was large, spacious, and entirely paved.  After our safety meeting, we ran out of the site and down new, welded track, traveling through varied scenery southwest to Connelsville, where this short line interchanges with CSX.  There, we turned and switched at Scottdale to their northwest branch and ran up to New Stanton and Greensburg.  We turned again and headed back, stopping at Scottdale for lunch.  Then we switched back onto the northeast line and returned to our set on location at about 4 PM, completing a run of 79 miles. 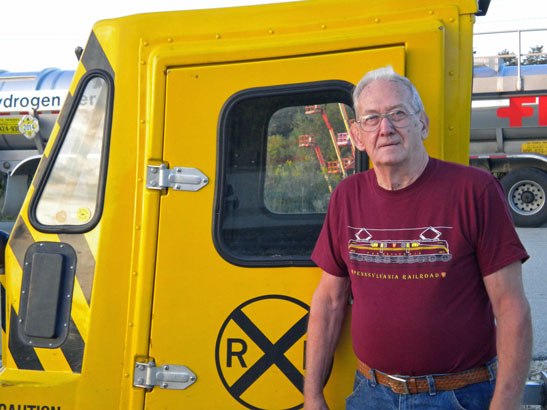 Dad ready to go on the run!

Both of these railroads are subsidiaries of Carload Express Inc.  John’s great relationship with them has allowed us to run on these roads for over ten years. Thanks to John’s leadership, this excursion was executed smoothly and safely and was very enjoyable. 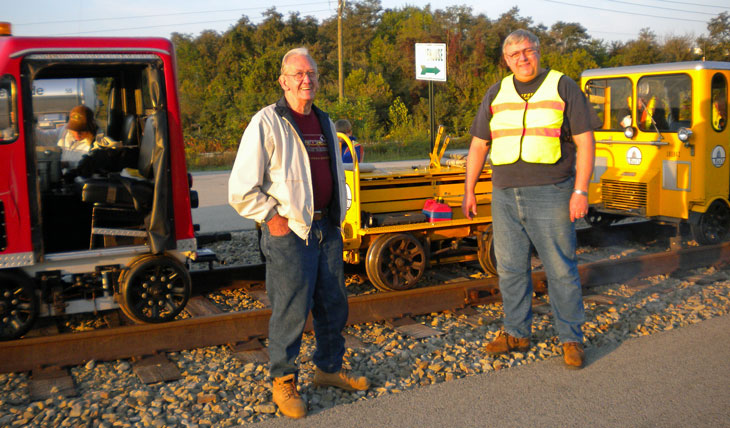 Harvey and Dan looking at the cars.

[Dan wrote this article for the Setoff November - December 2009 issue]