The Wellsboro and Corning Railroad - October 2009 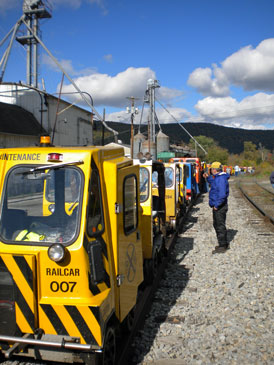 Taking a siding for the passenger train

The Wellsboro and Corning Railroad, a 35-mile short line that operates between Wellsboro, Pennsylvania and Corning, New York, was the place ride on a beautiful fall Saturday.  EC Larry Maynard arranged for trouble free ride with spectacular fall scenery on October 10.

We seton at Tioga Station, just north of Wellsboro PA.  The owner, Mr. A. T. Miles, generously provided coffee and donuts for the excursion participants.  Mr. Miles also took an active part in the safety meeting, warning us that we had “57 chances to die!” at each of the 57 crossings on the railroad.  The road is very safety conscious

The railroad runs a passenger train from Tioga station on weekend, so Larry had to carefully plan the excursion around the train’s operation that day.   From the station, we ran ahead of the passenger train going north and passing through Tioga and Lawrenceville.  The road parallels PA Route 287 and U.S. Route 15, following the valleys of Marsh Creek, Crooked Creek, and the Tioga River and on to Corning, New York. The only connection to other lines is at Corning, where there is an interchange with the Norfolk Southern Railway's Southern Tier Line.  The Wellsboro & Corning Railroad serves five customer sidings handling about 300 carloads annually. Most of this road was once part of a main line from the New York Central Railroad's Water Level Route at Lyons south to Williamsport. 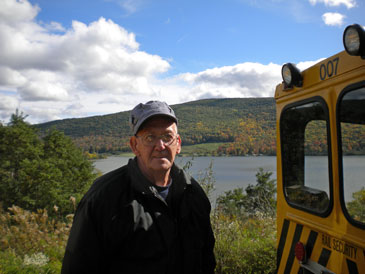 The terrain along the rails in this area includes interesting wetlands and a spectacular view of Lake Hammond. There are several scenic overlooks along the lake and Larry stopped at several of them to allow the group to take pictures. We continued north and crossed into New York at about 11am. We turned at Gangs Mills NY at little after noon. 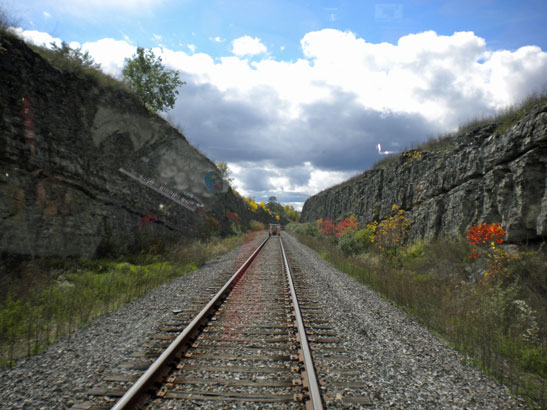 Heading back south, we stopped at Lake Hammond to allow the passenger train’s engine to reverse and to go back south to Tioga station.  We ran further south and then on to a siding to allow the passenger train to pass on the way North on its return run.   Larry made sure that all of us on the excursion moved to the side of the rails opposite the passing train for safety, an important rule we do not get a chance to practice very often.

We continued south to Tioga station and ran even further south to allow the afternoon dinner excursion train to depart northbound.   This allowed us to run all the way into Wellsboro   We turned in Wellsboro and then came back north to Tioga station and were all setoff by 6:30 PM.  The excursion, totaling 70 miles, was a great run through some really beautiful fall scenery.  Larry Maynard did his usual great job arranging a safe and interesting run at the perfect time of year.

[Dan wrote this article for the Setoff January - February 2010 issue]