The Route of the Black Diamond 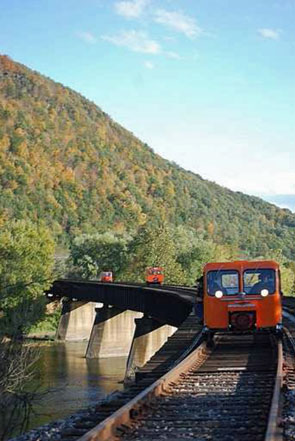 Warren Riccitelli and Al Elliott lead a wonderful excursion on a section new to NARCOA – portions of the mainline of the former Lehigh Valley Railroad in north central Pennsylvania and south central New York.  This excursion completed a three day string of excursions over the long Columbus Day weekend that began with a ride on the Wellsboro and Corning Railroad led by Larry Maynard on Saturday October 10, as reported in the last issue of the Setoff (Jan-Feb 2010). 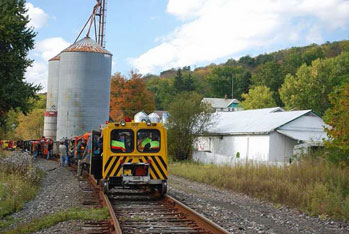 A first for NARCOA, two new short lines welcomed us for these runs.  On Sunday, the Lehigh Railway hosted us on their track that runs through the spectacular Susquehanna River Valley.  This track is part of the former mainline of the Lehigh Valley line from Scranton on its journey to Chicago and the Great Lakes.  It has recently been acquired by the new Lehigh Railway.  Warren has worked with the new owner for some time and finally obtained approval in the summer 2009 to run on it. 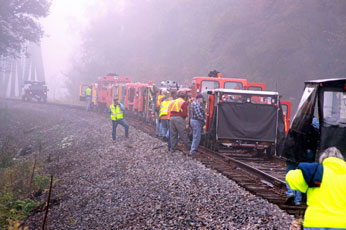 A foggy start from Sayre PA

A preview run Warren made in August revealed that this section is perhaps the most scenic route west of the Rockies.  The rail follows the Susquehanna River through mostly undisturbed valleys.  Wildlife abounds on this run.  We saw bald eagles, deer, fox and bear.

We set on in Athens PA, just south of Sayre at 7 AM.  After our safety meeting, we departed heading south at 8:30 AM, crossing a bridge and descending into a cold fog as we went.   Two stray goats greeted us along the right of way.

We continued on for several miles and then stopped at Towanda for a rest stop.  At Towanda, the railroad crosses the Susquehanna then over a long S shaped bridge that provides a great view of the river and surrounding valley. 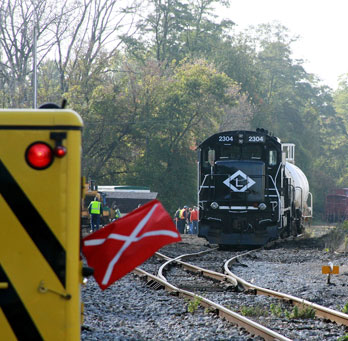 A Lehigh Railway Engine at Towanda

We continued to follow river for the most scenic part of trip.   From the cliffs high over the river, bald eagles soared on the updrafts creating a spectacular sight.  There were few crossing to deal with and the run was very relaxing.

After about fifty miles of this breath taking scenery, we stopped at Meshoppen for lunch and turned at 1:30 PM.    We retraced our route and were back and setoff as the sun went down.  Total miles for day were nearly 120.

On Monday, the Owego & Harford Railway welcomed us to run on their portion of the former Lehigh Valley mainline in New York State.  The group decided to set on early on earlier on Monday to get off the rails in and home at a reasonable hour.

We set on at the Delphine Street Station.  Our run was from Owego north to New Hartford where we turned.  We then went on Newark Valley for a rest stop.  We were back at exactly 3 PM and all were setoff and gone by 4:15 thanks to the courteous cooperation of all.

This was a fantastic trip and, most importantly a safe one.  Our thanks to Warren, Al, and Larry for a great weekend and we look forward to running this great route again in 2010.

[Dan wrote this article for the Setoff March - April 2010 issue]