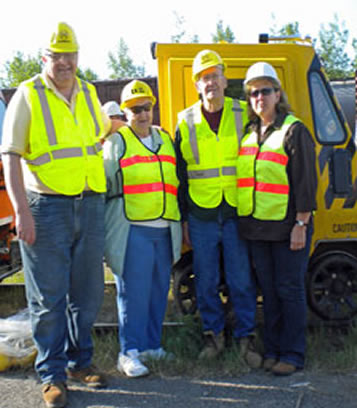 Dan, Jane, Harvey and Adrianne at set on

Weather, the natural beauty of the St Lawrence region of Canada, and friendly and welcoming Quebec member affiliates of NARCOA combined to make a wonderful three day excursion 22-24 May 2010. NARCOA members from the US and Canada met in the city of Quebec to run the Canadian National (CN) and the Charlevoix railroads. The weather was in the high 70s every day, allowing us a great view of the beautiful scenery along the rails. This excursion was made possible by Club RailCar Québec and Excursion Coordinator Louis-François Garceau, who planned and conducted an enjoyable three day run. All on the excursion were impressed by the careful planning and good communications by the EC. He mailed information packets in advance that included maps and hotel information. He negotiated a good rate at a local hotel for the first two nights. Mr. Garceau also arranged for a third night at another motel and included dinner that night and breakfast the next day as part of the basic excursion fee. At set on, we received a detailed schedule for all three days. 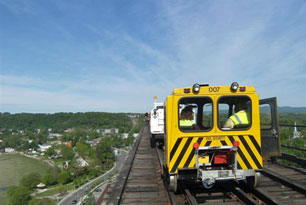 Saturday May 22, was our day to ride the CN. It is the largest railway in Canada, in terms of both revenue and the physical size of its rail network, and is currently Canada's only transcontinental railway company, spanning Canada from the Atlantic coast in Nova Scotia to the Pacific coast in British Columbia. CN also has extensive trackage in the central United States along the length of the Mississippi River valley to New Orleans. Set on was just beside the Ste. Foy VIA Rail passenger station. This is in the Bridge subdivision of the CN. After car inspection, set on, and a safety meeting, we allowed the morning VIA train to clear. The excursion coordinator decdided to have Dan ride with Adrianne as she operated 007 on the first part of the excursion so he could observe her from his car following directly behind us. With Adrianne at the controls, we then backed on to the main and departed. A few miles down the tracks we went through a wye at Cap Rouge and then we were on the La Tuque Subdivision. We soon were crossing the breathtaking Cap Rouge River Bridge. The Cap Rouge bridge is a rail-only trestle steel bridge named "Tracel" built in 1907-1908. Constructed by the CN as part of the Winnipeg-Moncton trunk, the steel bridge spans 3,335 feet at an average of 172 feet above ground and provides a spectacular view of the St Lawrence River. 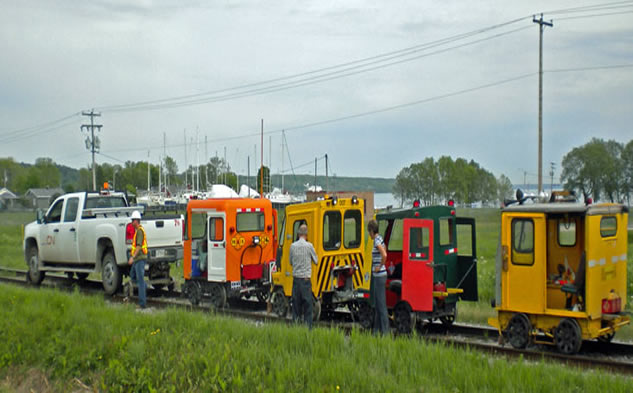 Stopping for Ice Cream at Portneuf

We enjoyed seeing the farming and light industry along tracks in this region. We stopped at Portneuf for lunch then went on to Deschambault, crossing the diamond where the Quebec Gatineau Railroad (QGR) crosses the CN line. The QGR is a short line that provides rail transportation services to the major industrial regions and ports in Quebec. It runs from Québec to Montréal and from Montréal to Ottawa (Gatineau). From there, we went on to the Lauralco spur for several miles. We turned and then ran back across the diamond to Portneuf for a mid-afternoon ice cream stop. During that, the excursion coordinator reviewed with Adrianne several important safety points and administrative matters. Following that discussion, he signed the official NARCOA form declaring her to be a certified railcar operator! Hooray for Adrianne!

Then it was back over bridge to the wye where we waited for a VIA Rail train to clear station. At the station we backed off main and turned for next day's run. We were done at 6 pm after a total run of 87 miles. Louis-François Garceau thoughtfully arranged for our motorcars to be guarded overnight so no setoff was needed. 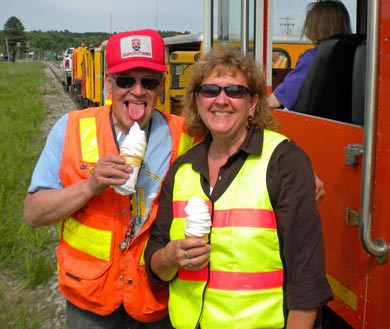 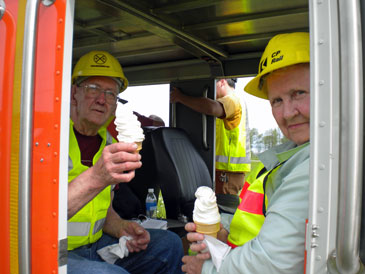 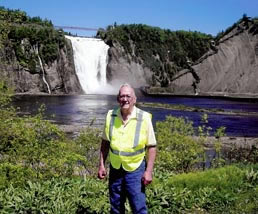 If you were to make a list of the top scenic runs in North America, the run on the Charlevoix Railway from Sainte-Anne-de-Beaupré to Clermont on the St Laurence River would certainly be on high on the list. The route, averaging about 50 feet above the river, offers spectacular views of the river on one side and the high slate cliffs on the other and includes bridges and two tunnels. At low tide, large rocks are visible in the river, which is tidal in this area. We saw large oceangoing vessels on their way to and from the Atlantic. The area has also has lovely family farms and picturesque small towns. 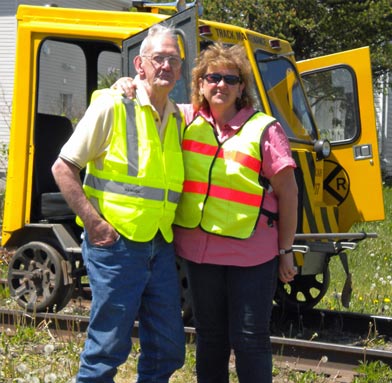 The Charlevoix Railway is a short-line railway that operates in Quebec. About 90 miles long, the road connects the city of Clermont in the Charlevoix region to a freight yard of the CN located in the Limoilou borough of the city of Quebec. This freight railway carries commodities such as clay, timber, lumber, cement, wood chips, paper, and peroxide. Along the route, we saw evidence of the $19 million project to rehabilitate the Charlevoix Railroad between Quebec City and La Malbaie. This will include work on bridges, drains and on a tunnel and may lead to the start of passenger service on the line. We started by backing on to the main line at Ste Foy and, after the Cap Rouge wye, we were on the Bridge Subdivision to Limoilou East. There, we stopped for a safety meeting as we changed to the Charlevoix railroad. This is the former Murray Bay Subdivision under the CN. 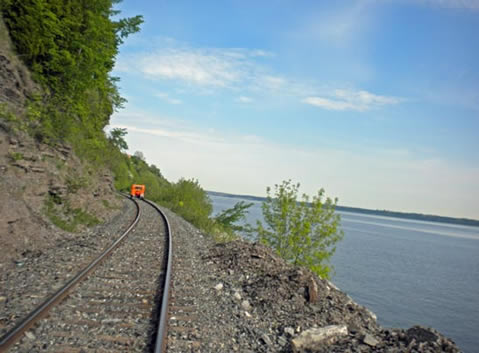 Typical Scene on the Charlevoix Railroad

We proceeded to Montmorency Falls, where the line crosses the Montmorency River, and stopped to look at the falls. The 275 feet high falls are the highest in the province of Quebec and almost 100 feet higher than Niagara Falls. The falls are at the mouth of the Montmorency River where it drops over the cliff shore into the St. Lawrence River. We departed and made our way to Sainte-Anne-de-Beaupré, the location of a large basilica and shrine. This was our lunch stop. 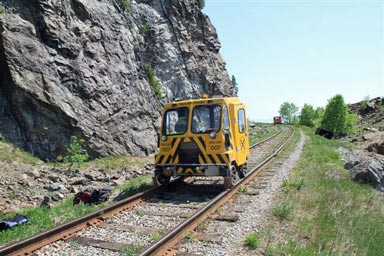 007 rounds a curve on the Charlevoix 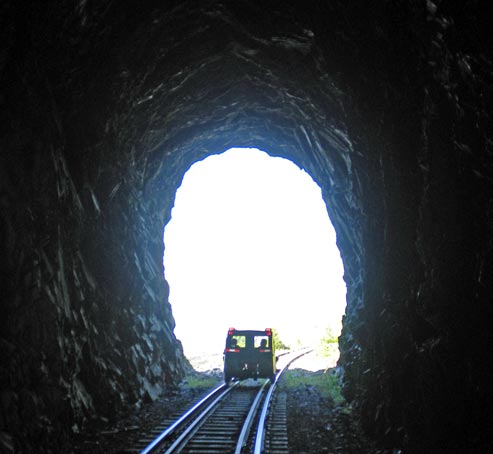 A tunnel on the Charlevoix

From Sainte-Anne-de-Beaupré the most scenic part of the journey began. We stopped at St Irene stop for rest break, a small town on the river. Then we went onward to La Malbaie where line turns inland and runs along the La Malbaie River. We ran past our destination and turned at wye. The excursion arrived at our overnight stop in Clermont at 7 pm for a total run of 110 miles. Louis-François Garceau arranged for a group dinner at restaurant near the tracks, across the street from our hotel. 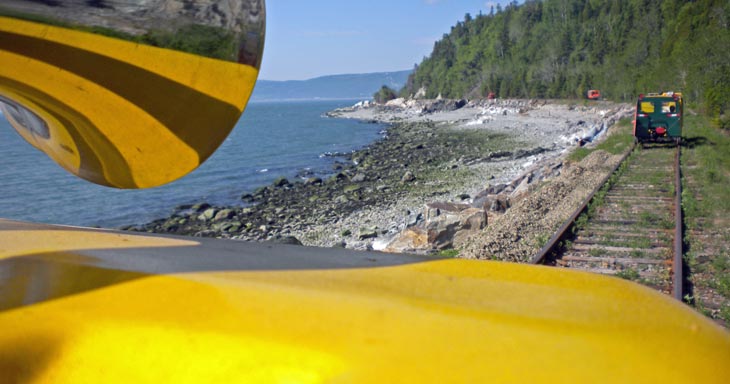 The rugged beauty of the St. Lawrence

Monday, May 24, was the observance of Victoria Day in Canada. After a full breakfast, we completed our safety meeting and departed from Clermont at 8 am headed for Ste. Foy. It was a beautiful morning with nice breeze off river. 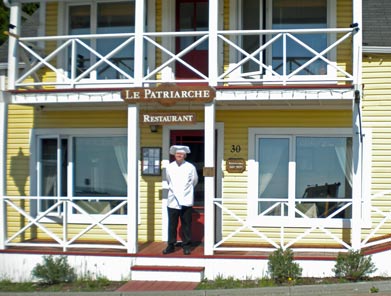 The Chef came out to say hello

Our rest stop was at La Baie St Paul. As the excursion neared the end of the Charlevoix, we experienced several breakdowns, but they were handled very well by the EC. We stopped at Limoilou to rearrange the order of the cars and for a safety meeting with CN before returning to their track. 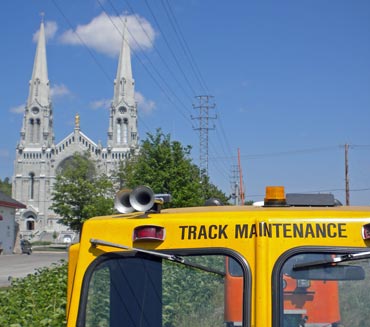 007 at the shrine of Sainte-Anne-de-Beaupré

We arrived at 7 pm in St Foy and cleared the main line in time for a VIA train and a CN freight to use the same track south bound. We all appreciated the leadership of the excursion by Louis-François Garceau. He managed breakdowns and stops efficiently and even found time to mentor three new operators. We also thank our fellow NARCOA Quebec members for the warm and friendly welcome we received and their gracious efforts to host us. 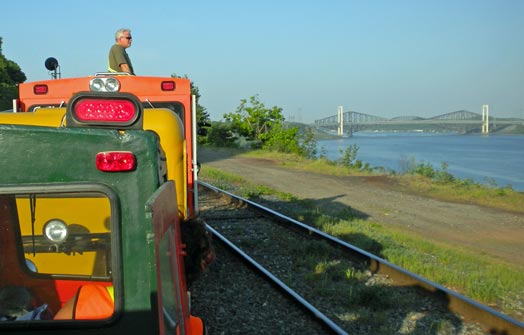 Pierre Lassonde enjoys the view of Quebec Bridge as we return to Ste. Foy

The next time this excursion is offered, my advice is to sign up early – it is an extraordinary experience!

007 crossing a bridge on the Charlevoix 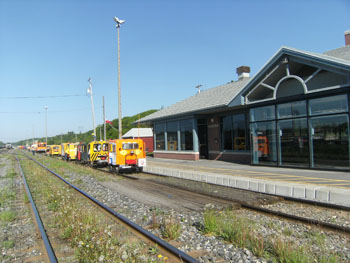 At the Via Passenger Station in Ste Foy 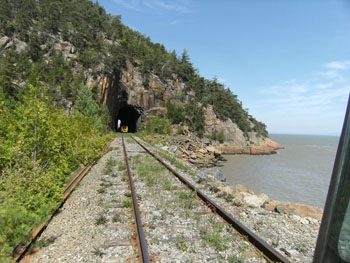 007 enters tunnel on the Charlevoix 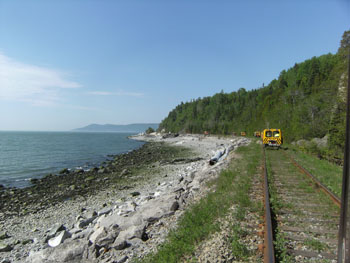 007 headed home on the Charlevoix

Dan wrote this article for the September - October 2010 Setoff